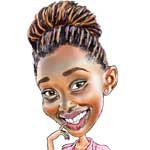 My good friend Amos promised me an audience with Njoki Chege one of these fine days I’ll be in town. I should actually blame myself for not pushing hard enough, to see this deal work. The timing couldn’t have been better. Wait a minute; why would I be interested in meeting Njoki Chege? Would she go ahead and throw mud at me for showing up late, or would it be about my dressing code? Would she judge me for my choice of rendezvous or how I would sip my cappuccino? Would it be about the length of my finger nails or everything to do with my deo? Would I join her list of men who trigger (not inspire) her to write about damn men. Truth be told, Njoki Chege am waiting for this meeting to experience your other persona. If it ever happened, I’d ask you several questions; I’d confirm whether you’ve watched the movie ADDICTED and your opinion of it. It’s on this note that I’d indulge you on your childhood. Whether you had a father figure while growing up and who is this man who messed up with your life to warrant the rest of us, brace your hummers and tongs for the rest of our lives. I’d ask about this boyfriend that promised you heaven on earth but went ahead to fail miserably. I’d ask about these men in your life that deluded or rather provoked your ethos in your teenage life. Which are these scores you’re settling in a national newspaper, dear CITY GIRL?

But while we wait for this meeting, I wish to register my disturbance from your consistent onslaught of the XY chromosome.That’s all the biology I know. Who has paid you to crush our egos? Who sent you to make our hearts pound more anytime we get hold of that Saturday Nation Newspaper? Men have become society’s punching bag. Young boys growing up are struggling with the overwhelming noises of extreme advocacy of the girl child. No pun intended. Men are paying the ultimate price, of people nursing wounds of a bad childhood or them that are frustrated with life. A determined section of the society is venting anger just to feel good about themselves. Njoki Chege summoned us, pulled a chair and advised us to raise our standards to meet hers. Well, fair enough. Probably, she’s frustrated by the calibre of contemporary men society is churning out. But not all men are miserable. Not all men are visionless bla bla bla.. In any case, if you keep on bumping to these kind of men, the only person you should blame, is yourself.  You might be the one with low standards, you know! Or rather hallucinating about this ideal, tall, handsome guy with this perfect personality, financially endowed, who’ll choke you with unparalleled romance.

Njoki Chege is engaging in runaway radicalisation of our girls and women. How do you deal with a son who whenever he peruses his dad’s newspaper, encounters this article that demeans men every other week. Njoki, you are hurting your yet to be born son by blanketly and consistently condescending the Kenyan man in a national platform. How are men to blame for sharing pics on Instagram? My senses tell me Instagram is open for both genders including men from Kenya. According to Njoki Chege by laws, no man should share pics about their ruracios and ngurarios (dowry traditions). Why could she be bitter about it, while every lady craves for the day that honour will knock to their homestead? It comes with territory and tremendous respect. I mean, it takes a lot of courage for a man to bother friends to cheap in on the whopping budget. Worse still, sitting down with stubborn wazees negotiating about bride price, paying hefty amounts of money, bringing along buckets of honey and spotless goats, crates of beer and other shoppings is no mean achievement. To the rest of his family it’s a sign of commitment. Now, if you happen to share that experience on Instagram, Njoki Chege qualifies you as a cheap man, with low standards and no ambition. Let me educate you Chege; as weddings are to ladies, so are ruracios and gurarios to men. Let me not mention about socialites on these streets who make it our business to care about their foreign boyfriends who own these alluring mansions and intimidating cars.

Njoki Chege, if you live in a neighborhood where the boy next door drives this blue subaru with deafening exhaust sound, blame yourself or your employer for not affording a better hood. Dont make it appear like your financial woes should be a ‘man’s failure’. Men also persevere in neighborhoods that have this ‘extreme gossip lickers’. You know of these women who can tell whether you’ve chucked out for jobo or not, with their instincts. They’ll converge and spread half-truths and concocted lies on every female who checks to your digs even if it’s your sister. Men will never throw a blanket condemnation against all women for these uncivilised acts. We discern and sift and later address accordingly. Unlike Chege, we celebrate great women in our lives, with sincere hearts. Am also of the opinion, that once a man gets a first job, he should work towards getting his house. However, nobody should cast the first stone at them without first appreciating why their parents still harbor them at 35. Don’t blame them, blame their parents. Furthermore so many women still live in their parents’ digs, some with several kids. We (men) never raise our eyebrows unusually!.

To me, Njoki appears to be constructing and wedging a very selfish conversation of blaming men for all women woes. Its the high time you  gave men a break and deal with your estrogen issues. Am a writer and I appreciate work done behind the scenes to make a good article. Talk of researching, drafting, editing and more of editing. Its never that easy. However I have a problem with them that hate and propagate propaganda every week about a particular gender. It not only exposes ones weakness as a writer, but also makes one become very predictable in the sense that we can always tell what you’ll hate next.

Dear Njoki, kindly let men be. This overzealousness in demeaning man in women circles to say the least, is despicable and unfortunate.