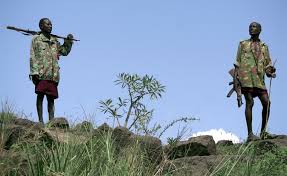 Yesterday Kenya marked her 51stJamhuri day commemorating the day we officially became a republic country. Figuratively it should be a time to reflect our journey of freedom, civilization and challenges that we have overtime surmounted and persistently daring to overcome through established institutions and rule of law. That’s the ideal situation; however my personal opinion is rather not positive, am a saddened Kenyan. The founding father Mzee Jomo Kenyatta eloquently spoke of his desire to see to it that Kenya conquered poverty, ignorance and laid a foundation of a sound health system.

Am saddened because apart from the three listed objectives which were our precarious threats five decades ago; we have moved from bad to worse. We are chocked by negative ethnicity, and a cancer called corruption. These two have borne local cells for terrorism, bad governance and unprecedented levels of impunity. We view fellow Kenyans first with tribal lenses. Corruption is our cup of tea, we can generally be defined as the country of haves and have nots. We are greedy and selfish lot, going to the length of endangering the national security and our very precious lives just to get wealthy.

David Ndii a popular columnist on Africa Economics previously pointed that the private security sector in Kenya is larger than the police service. He further noted that Kenya has over 500,000 small arms and light weapons most of them in the economically isolated Northern Kenya. That is to say more than two guns for every soldier and police officer. Is it that not scary statistics? I once interacted with a guy from Turkana region who confessed to me that Samburu County alone has over 6,000 guns. In fact he moreover leaked to me that an AK – 47 bullet goes for sh.50. Baringo, Samburu, Pokot and Turkana Counties’, single medium of exchange is the bullet. The more bullets a community boosts of, the more ‘economically viable’ it becomes. With bullets you can withstand occasional cattle raids, or even stage a successful raid on neighbouring communities.

Since we are country run by cartels, we better brace for harder times. Am not a sadist though, but the reality is powerful cartels run this country big time. Affluent people are arming their communities in troubled regions to stage manage cattle rustling for commercial purposes. Deploying Kenya Defense Forces is the cosmetic part of the ‘solution.’ It will only quell the storm for the time being’ since we are myopic and gullible people. It is akin to appointing ineptitude personalities like Ole Lenku who have no background in security to head the Interior ministry. We must address fundamental challenges which I have highlighted previously in this blog, bedeviling our men and women in the security service.

Canadian journalist Jay Bahadur, who researched for years and authored ‘The Pirates of Somalia’, laid bare the hard truth of the wounded state of this country. KDF did a profound job of rescuing Kismaiyo town from the hands of Al Shabaab, cutting off charcoal trade which ostensibly financed the militia. However, United Nations has cited KDF to having given in to the charcoal cartels in Somalia. Jay noted that the more charcoal exported from Kismaiyo, the more smuggled sugar comes in to Kenya, the more that border policy in Kenya is distorted, the more smuggling of other things take place, and the more dangerous Kenya becomes. It’s a fact that the four Westgate perpetrators had crossed to Kenya from Somalia four months prior to the heinous attack. According to Jay, two or three lorries arrive in Ifo, Dadaab every night carrying 250 bags of smuggled sugar. Kenya is run by cartels in milk, oil, pasta, rice, cigarettes and clothing industry.

Every news item nowadays has every chances of it being negative. From the ‘Magus tragedy’, strippers, rapists, alcoholism, murderers, poachers name it. We have domesticated evil and its siblings and moved on. We must as a country rise to the occasion, learn to be patriotic, fight for it and guard it jealously; from the landlords, to traffic police, to immigration officials to village elders. This country has shortage of noise makers who’ll expose and ashame perverts dragging us behind. My standing ovation goes to the likes of Mohammed Ali, Paula Kahumba, Boniface Mwangi , Gado the cartoonist, twitter bigwig @Gathara, Sunny Bindra and many other unsung heroes and heroines. Every 12th December, we will joyfully celebrate Jamhuri day, but the big question is, are we advancing closer to prosperity or treading downhill?