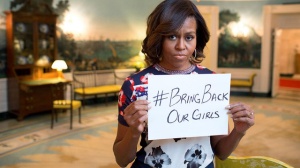 International Labour Organization estimates 1.2 million children are trafficked worldwide, and the US State Department says as many as 27 million men, women and children are victims of trafficking at any given time. It is these statistics that cause outrage and anger among millions across the globe when a terrorist group, Boko Haram invaded and kidnapped close to 300 girls at the cover of darkness on April 14th, at Chibok Girls Secondary School. It is only despicable to tolerate such a thought. More annoying was the lackluster reaction from Nigerian government, for starters it took 18 full days for President Goodluck Jonathan to comment about the issue. To show how clueless he was, he mentioned formation of a committee to look on the issue and possibly bring the girls home, that’s pure nonsense and ridiculous. How do laid back, pot bellied men in government imagine they can bring the girls home, three weeks after. Was it justified for the government to squander all that time while they had a military at their disposal.

Boko Haram founded over a decade ago as Congregation of the People of Tradition for Proselytism & Jihad by one Mohammed Yusuf, an Islamist religious sect and terrorism group believes Nigeria is led by ‘non believers’.The group’s goal is to establish a fully Islamic state, including implementation of criminal sharia courts across the country. Nigeria’s government like any other developing country faced with terrorism, is struggling to contain this ‘madness’. Some political pundits have argued a lot of politics its at play consequently helping Boko Haram ride along and drive home its agenda. President Goodluck Jonathan comes from the southermost state and his nemesis mainly from the northern states are organising and funding Boko Haram to make their states ungovernable thereby destablising the national government. 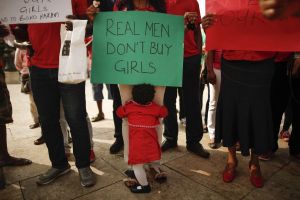 The world is tilted towards Chibok area in Borno State, Northern Nigeria where 72% of primary aged children never attend school, according to the US Embassy in Nigeria. Boko Haram loosely translated as, ‘Western Education is sin’ destroyed as much as they could in the ill fated school, thereby shutting education and dreams to many school girls. Its race of hope against hope as the world shudders at the worst fears, sexual exploitation, child soldiering and forced marriages. It is also believed the girls could be used for intelligence gathering, cooking and cleaning for the militants.

Nigeria should have acted more swiftly, President Goodluck should have also swallowed his ego on time and admit they need help from the developed countries who have more experience, are better organised and armed with more intelligence. The world is not helping much apart from the roller coaster reactions, the noise has dwindled, how do world leaders sleep and tolerate such inhumane acts. The noise must not stop nor fizzle, you simply never know who they will target next, it could be you, me or even our relatives.