On August 21st this year, chemical weapons were at play in Syria in what security pundits term as ‘sarin nerve gas’. At least 1,400 people died many of them children, quite unfortunate. The attack caught the West hands off and totally oblivious. No one has claimed responsibility but as expected, opposing camps are busy trading accusations. The rebels are alleging Assad’s administration is behind the attacks, on the other hand the latter is fiercely defending itself even going further to purport it was stage-managed by rebels.

Assad and company are daring the West to make good their threat to use unilateral military action. The argument they have is that, rebels executed the attacks to compel U.S and its allies to act on Assad by over throwing him. So what options does Obama have ? Last year, he made it clear that U.S would take action if Syria crossed the ‘red line’ and there is evidence it has. As CNN would put it, his choices are bad, worse and horrible. For starters, its closest ally, Britain’s support was slowed down after its parliament rejected use of its military in Syria. 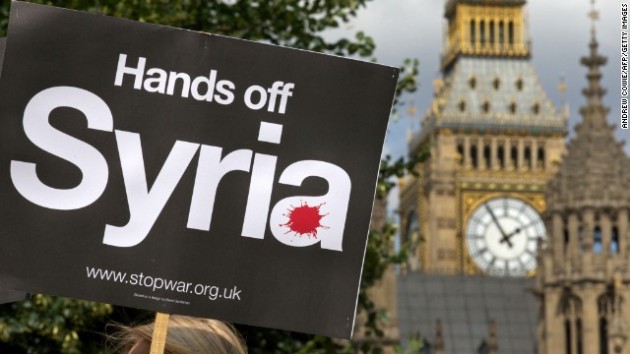 Closer home, Americans are divided down the middle, only half the population support use of military power and more interesting, over 80% say it should happen with congressional approval.

The biggest headache for Obama is complicated by the fact that Al Qaeda has infiltrated the rebels. Equipping them could be counter productive akin to what happened in Libya, the oppressed may turn out to be the oppressor. Iran, Syria’s big brother is also likely to come in handy to assist an accomplice once the West pounces. Worse still, Syria has had enough time to hide its weapons and any action by U.S to send drones may end up in deserted buildings if not to civilians.

The world is getting tired of Syria, three years down the line over 100,000 people have been killed. China and Russia are playing safe and are against any efforts of the U.N security council which they are member countries to act, by imposing penalties on Syria. They have categorically said they are not taking sides and are pushing for a transitional government as opposed to entirely over throwing Assads government which might cause worse problems.

Syria has not attacked any U.S targets nor its citizens hence the need for Obama to consider a coalition of countries to demystify the notion that America is encroaching sovereignty of the Arab country. However Obama made a smart move to drag congress in this mess in case it haunted him in future. Republicans who will not ratify America’s use of military will have a hard time justifying themselves. A simple reason would be, if America does not act now, it will encourage Iran to proceed with its nuclear weapon program which is more catastrophic.

The future is grim, America is at a crossroad, Obama is confused. He is riding on one choice, to keep waiting and hope for more evidence on use of chemical weapons,some  new ally or better still new intelligence.