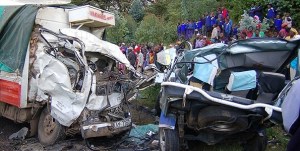 Kenya loses about 3000 lives through road accidents annually as a result of at least 13000 crashes, translating to eight everyday. 85% of which are attributed to human error and 15% due to poor roads. The third highest cause of deaths in Kenya is road accidents after malaria and HIV/AIDS. In monetary terms, road crashes cost the Kenyan economy about sh.14 billion or 5% of the GDP annually.

The reason Kenya has one of the highest number of road accidents is due to the casual way we treat the cases. We have come to accept it as a way of life, its ‘inevitable’, we can as well blame fate. Now, that is mediocrity, its unacceptable to accept and embrace impunity and ignorance. In my simple research, I found out that the common causes of road accidents which to some extent sounds like a cliche at least in Kenya are; Over speeding, over taking carelessly, drunk driving, over loading, reckless pedestrians, poor road conditions and incompetent or unlicensed drivers amongst others, which over the time, have claimed thousands of precious lives.

Rogue driving schools working in cahoot with corrupt police force are partly to blame. The schools are dishing out driving licenses to people who have never attended driving lessons. We are talking about people who cannot even start a car, that is how serious it is. Am tempted to say ‘ufisadi itatuuwa’. Just recently, a journalist working with Nation Media Group easily walked in some of the so called top notch driving schools in Nairobi and obtained genuine interim driving licenses without attending a single driving test, with just sh. 6,000.

My worst nightmares should be when travelling along Thika road.

The bus drivers are not only reckless but untouchable.Pedestrians in our very own peculiar Kenyan way no longer use footbridges which ironically have been designed for them. I do not understand how people dare to cross eight lanes while there is a safer alternative. Of late there has been an influx of motor cycles in the market which now serve as the main means of transport in some regions but that not with standing, they have really messed our roads. Since they are cheap, they come in handy in rural areas. Even in developed countries, they have the highest fatality rates which is no good news for Kenya considering the riders only go for about two hours training.

We do not have many options other than observing the basic traffic rules and enforcing them. I must commend ‘road-hog’ an initiative of Citizen tv which is trying to unmask rogue drivers on our drivers and forwarding their details to KRA for action. As a society we must embrace a culture of respecting the law otherwise will remain a third world country and neither live to achieve Vision 2030, it will just be an illusion. But worse still, many family breadwinners, our relatives and friends will continue to perish in the hands of ‘killer drivers’. Toa Sauti!