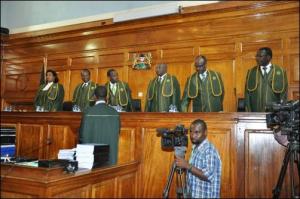 My lords thank you for accepting my request to give my contribution that may assist you in making a ruling on this enormous task ahead of you. I will not address you “as some six people”, am fully aware you were submitted to rigorous public vetting and therefore trust that your verdict will be fair, objective and most importantly, have Kenya at heart.

In any given election, turn out alone speaks volumes, we have to appreciate Kenyans did vote in large numbers a clear indication of the trust they bestow I.E.B.C. In fact prior to elections opinion polls rated it as one of the few institutions they have confidence with. Having said that, I have to point out, there was no mischief from I.E.B.C to rig this elections, if anything, they have been very transparent all along. Raila Odinga’s chief agent was present in a meeting bringing around all agents when I.E.B.C decided to use the manual system. Electronic systems fail, Ghana and the U.S just to mention a few are good examples. In fact CORD affiliated parties were on record agitating I.E.B.C to revert to manual system. Even in the offices we have back ups since electronic systems fail, we can not therefore demonise I.E.B.C for having a manual register.

Lets recall that procurement of electronic equipments was handled and co-ordinated by Office of the prime Minister, so if there was a problem with quality or reliability of the machines, they would have realised that before hand. I.E.B.C set out a whole month for public scrutiny of the register and most importantly for voters to confirm if their names appeared in the register. People with disability or whose body parts could not be captured by the B.V.R, had their names appearing in the ‘Green Book’. Logically the total number of registered voters in the electronic system could not tally with that of the ‘special’ book since it did not factor them. There is no instance where petitioners showed any scenario of unregistered voters voting nor number of voters exceeding that of registered voters.

The petitional must have substantial evidence to show that it affected final election results, however lack of evidence does not handicap this court in anyway.The court is in a position to determine validity of this process. In writing your ruling, my lords please appreciate you are making an unprecedented verdict, do not create a notion that elections can only be won in courts. We must be hard on persons with conspiracy theories meant to kill emerging institutions.

One thought on “IF ONLY I WAS AN AMICUS CURIAE”